God is writing a great big story and you have a standing invitation to be a part of it. When you hear a story about God’s supernatural work in someone’s life, it builds your faith. Every week, host Meridith Foster sits down with a guest to share their chapter in God’s unfolding story – this is The Unfolding podcast.

Page 142: Courtney Smallbone – November 18, 2022
Courtney Smallbone’s family has followed Jesus for generations. But as a teenager, Courtney was unconvinced. Then a pivotal experience changed her from skeptic to whole-hearted believer. She saw God doing the impossible, and that marked her for life. It changed her expectations and prepared her for a day when she would need to believe for something that seemed impossible. Courtney and her husband Luke, who is half of the duo of for KING & COUNTRY, have four children and live in Columbia, Tennessee.
Page 141: Mike Weaver – November 11, 2022
Despite what we often believe, success doesn’t solve the problem of insecurity. Mike Weaver is the lead singer of Big Daddy Weave. For more than 20 years, the band has experienced amazing success – awards, gold and platinum records, and #1 songs. They’ve toured across the U.S. and beyond. But all that affirmation wasn’t enough to quiet an inner critic. For Mike Weaver, he was never enough.
ARCHIVE: Page 103: Dareth Ly – November 4, 2022
In 1975 when the Khmer Rouge took over Cambodia, Dareth Ly was seven years old. He spent most of the next four years in a work camp, barely surviving starvation and torture. When he landed in the U.S. as an orphan, he forced himself to forget everything about Cambodia. He knew he would never go back. But God can take what others meant for evil and turn it for good. (Caution for parents: this story contains episodes of violence and is not appropriate for children.)

Brant Hansen is from small-town Illinois, and is a self-professed nerd, diagnosed with Asperger’s as an adult. He’s a fan of C.S. Lewis and toast. “Producer Sherri,” also a radio veteran, is from Pittsburgh, has one of the world’s great laughs, and demonstrates incredible patience with Brant. Both are believers in Jesus, but have difficulty fitting in with modern American church culture. Together they have a daily radio show that is syndicated across the country, with segments ranging from the latest animal news, to interactions with listeners, to discussions about how messy life can be, and how good God is.
All Episodes
BrantHansen.com || Google Podcasts || TuneIn || Spotify || Apple Podcasts 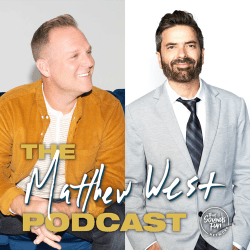 The Matthew West Podcast: Episode 95 with Brant Hansen
My guest today is a syndicated radio host, author, comedian, and all-around super interesting guy! He and I have been friends for years and usually he’s on the other side of the microphone asking me questions! But today I get to talk to him about his important new book, The Men We Need. I think you’re going to love this conversation. So let’s go to the Story House with Brant Hansen!

Purposely – Brought Back to Life: I Was Dying Having Fun With Sherri Lynn – April 27, 2022
From the Brant Hansen Show, Producer Sherri says she was living a life that constantly had her racing toward the edge of a cliff. She could see the edge of the cliff but she couldn’t take her foot of the gas. When she learned that Jesus doesn’t cringe at the mess and that all you have to do is simply lay it down at his feet…that’s when everything changed.

Meet the Gamechangers, the Influencers, and those who are not afraid to show up with a shovel if that’s what it takes to move a mountain. Go inside the minds of true American trailblazers who are making a difference by sharing their stories of personal triumph, overcoming obstacles, defeating fear, fighting addiction, and rejecting failure. Hosted by nine-time Emmy winner David Sams with life coach to the stars, Tim Storey, and TV personality, Victoria Robinson.
All Episodes: ContagiousInfluencers.com

#178 TASHA LAYTON finds transformational truth and balance in the bright light of success
Top female Christian recording artist Tasha Layton takes a look at what God has done as she is heading from one tour to the next, working on a second book, releasing a full-length Christmas album called “This is Christmas,” and raising her two kids with her musician husband. It’s go-go-go, but Tasha shares with nine-time Emmy winner David Sams how she’s staying grounded knowing it’s okay to drop some balls in the chaos of life. Tasha also talks about her prayer journal Boundless inspired by God’s love and latest chart-topping single, “How Far.”

Thanks For Your Support

Mail your gift to:

All donor information is strictly confidential and is not released to anyone or sold.

I’ve been cutting myself for years to numb my pain – just so tired of it all. I started going to Bible study and found Word FM online. Though my relationship with Jesus is new, my life is already turning around.